My enthusiasm for new the DIY Framework Laptop and the Linux-powered Steam Deck coupled with the release of Ubuntu 21.10 has lead me to installing a Linux desktop environment on one of my computers.

While I administer some Linux servers in the cloud, it’s been a long time since I’ve considered Linux as a desktop OS on physical hardware. And the landscape has changed quite a bit since. Secure Boot is a thing, Wayland seems to be the future, but KDE is still best on X.Org, and Ubuntu switched away from Gnome and back again.

I’m starting with Kubuntu 21.10 right now, but I eventually want to give Arch Linux a try, since it seems to be a good foundation for building up your desktop environment piece by piece. Also, it’s the base for the new SteamOS and is growing in popularity as the base for other distros like Manjaro.

I’m going to migrate some of my daily activities to Kubuntu and try using it as my personal daily driver OS for the month of November.

I’m starting with a 2017 Dell XPS with an Intel i7-7700K and Nvidia GTX 1060. Switching to Linux seems like a good way forward for this machine, since the CPU is unsupported by Windows 11.

Because this desktop features a pretty modern graphics card, I want to try playing some Windows-only games on it via Steam / Proton. I just finished Mass Effect Legendary Edition, so I’ll probably try playing that for comparison since playing it on Windows is still fresh on my mind.

I had no issues installing Kubuntu 21.10. The hardware is a few years old, so just about everything worked out of the box. No driver issues. Wi-Fi even worked in the installer, I had sound with no extra configuration, and it automatically installed the required Nvidia drivers in the OS install process. The installer also walked me through the Secure Boot keys, so I could leave that enabled.

I was also able to upgrade from KDE Plasma 5.22 to 5.23 (the 25th Anniversary Edition) without fuss using the Kubuntu backports PPA.

After my first boot I ran Geekbench (version 5.4.1), and the Linux scores are actually higher than when I ran it on the same machine on a clean installation of Windows 10 earlier that day.

And overall the system doesn’t feel sluggish or hacked together. More than a decade ago when last tried running Linux as my desktop OS, I remember things feeling slow or unoptimized for the hardware compared to Windows and fragile. Like moving a window across the screen or video playback was slow and choppy without editing some config file in /etc/. 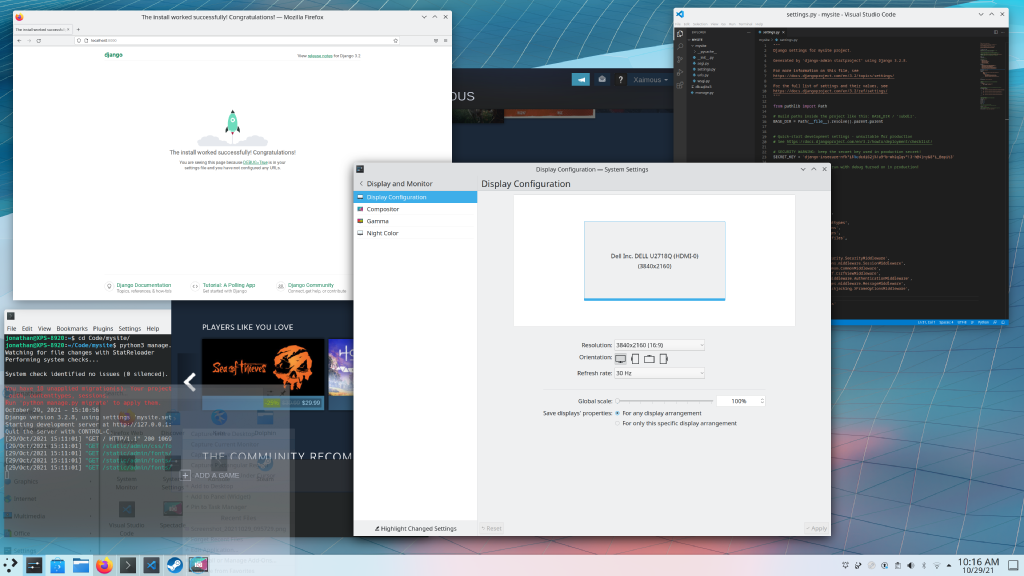 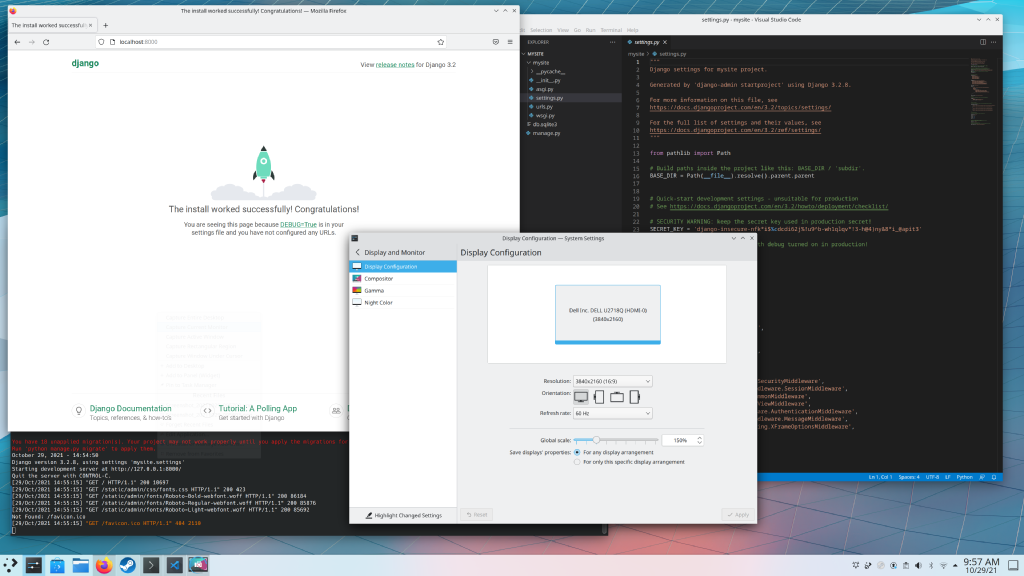 Changing the global scaling in System Settings to 150% worked. The KDE UI and application chrome stayed roughly the same, but the content of the non-KDE applications adjusted to the scale I was expecting.

As a Laptop Operating System

Ultimately, I want to install Linux on my Framework Laptop that is due to arrive soon. While there seems to be some success with some Linux distros and kernel versions in the community forums, I’m going to install Windows on, initially.

I’m concerned about driver support for things like the fingerprint reader and wireless card–both seem to go back and forth between working and regression based on the kernel version. I am also concerned about how touch gestures are handled, sleeping when the lid is closed, and overall battery life while using Linux.

I think a DIY, repairable laptop deserves a DIY operating system, but I primarily just want to give the hardware a fair evaluation without the baggage of possible software issues clouding my impression of the laptop itself.

The Month of the Linux Desktop

Besides some light graphics editing, most of my computer usage is web development and gaming. All of my web projects deploy to Linux servers and my dev tools have Linux versions. And if Proton works as well as Valve is hoping it does to base an entire machine around it, I could see using Linux in November not being much of a issue for me.

If the coming month of daily driving Linux works out, maybe 2022 will be the year of the Linux Desktop, at least for me. And I end up replacing Windows on all my machines with it.